What makes Texas popular aside from its cowboys would be its strict penal laws. It has one of the largest death row population in the country, and it takes its justice system very seriously. In Crystal Simmons’ report for Cypress Creek Mirror on August 26, 2013, she explains the status of sex crimes in the state:

“Over the past few years, state legislatures have been tightening laws and increasing the penalties for convicted sex offenders, passing three major laws in Texas.”

“These laws aren’t really a deterrent; It’s punishment,” said Judge Denise Collins. “You can control sex offenders, but I don’t believe you can rehabilitate them.” …

“In Texas, Rep. Riddle passed a version of the [Jessica’s] law requiring anyone convicted of continuous sexual assault of a child under 14 to serve a minimum of 25-years without parole to life. A subsequent conviction of the same crime will result in a mandatory life without parole sentence. The only exception was if the offender was less than five years older than the victim.”

The age of consent in Texas is 17. Sexual assault of a child (age 14, 15 or 16) generally falls under the category of a second-degree felony. Should a person be found guilty of committing a “non-aggravated” (for example, no weapon involved) sexual assault crime against a child 14 to 16 years of age, a judge or jury may impose up to a $10,000 fine and sentence the person to two to 20 years of imprisonment. It used to be that sexual assault of a child under 14 translated to five years to life imprisonment. But with Rep. Riddle’s new version for “Continuous Sexual Abuse of Young Child or Children,” the penalty can be much more severe. 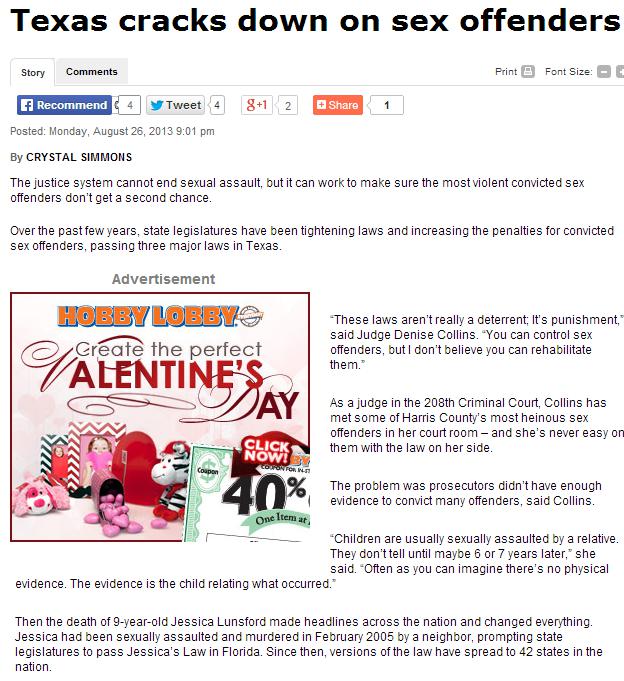 Should a person be found guilty of committing a sexual crime against a child 14 to 16 years of age, a judge can hand down a $10,000 fine or sentence the person to 2 to 20 years of imprisonment. After serving time in prison for any form of sexual assault of a child, a person is usually required to permanently register as a sex offender.

These laws fall perfectly in line with what Judge Collins stated in the interview. The state of Texas believes that sex offenders do not have the capacity to rehabilitate themselves. As such, heavy punishment such as prolonged periods of imprisonment is seen as warranted.

An experienced Houston sex crimes lawyer like Atty. Grant M. Scheiner can handle cases involving sex crimes with utmost proficiency. Unfortunate as the situation is, one of the best ways to deal with it is to get proper legal advice and guidance from professionals who know the system and the processes involved in it.