“Conroe police arrested a 70-year-old man after he allegedly paid to have sex with a 16-year-old girl early Saturday morning.

Will Ewing, a retired Conroe Police Department sergeant, is charged with compelling prostitution and sexual assault of a child. Ewing worked for CPD from 1982 to 2003 before retiring.

Jasmine Baker, 21, who allegedly came with the girl to Ewing’s Conroe home, also was arrested for sexual assault of a child and compelling prostitution.

Under the Texas Penal Code, a person commits compelling prostitution if he or she knowingly causes a person younger than 17 years old to commit prostitution.

Ewing and Baker are being held in the Montgomery County Jail on $150,000 bonds.” 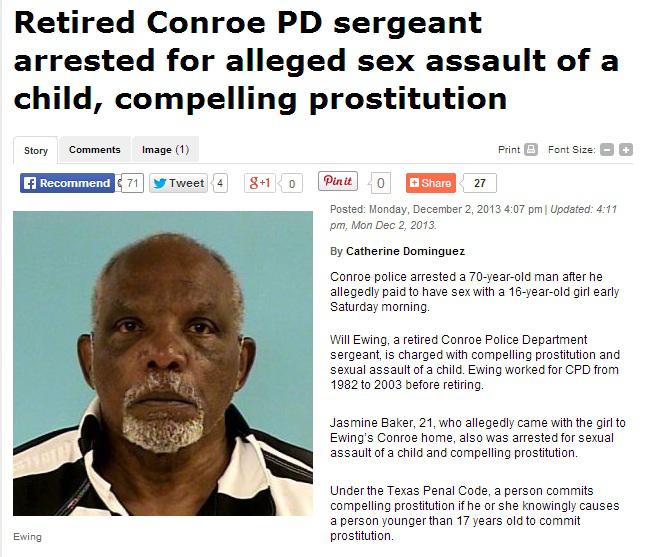 It is a crime to commit, promote, or compel prostitution in Texas. Under state law, a person commits a prostitution crime if they intentionally engage in or offer to engage in sexual contact for a fee. A person may also be charged with prostitution if he or she solicits another person in a public place for sexual conduct. First-offense prostitution in Texas is a Class B misdemeanor, punishable by either a $2,000 fine, no more than six months in prison, or both.

However, if the defendant has been convicted of prostitution once or twice in the past, a prostitution charge may be elevated to a Class A misdemeanor, which carries a $4,000 fine and/or no more than one year in prison. Three or more previous prostitution convictions makes the present charge a state felony that’s punishable by a $10,000 fine and/or 180 days to two years in prison.

The news excerpt above, taken from Your Houston News, doesn’t specify if this is Ewing’s first offense or not. Nevertheless, the state prosecutor must prove every element of his prostitution charge beyond a reasonable doubt before he can be convicted. This could be very difficult to establish, and if the judge or jury doubts that he committed the offense, the charges against him may be reduced or even dropped altogether. This is why a having good Houston sex crimes attorney is very important.

A knowledgeable Houston sexual assault lawyer, such as those from reputable law firms like Scheiner Law Group, P.C., should be able to help clarify the intricacies of the case, as well as the possible remedies. Don’t hesitate to call these firms for consultation regarding an alleged prostitution or solicitation offense.