Sadly, people are quick to judge the parent, relative or family friend accused of sexually abusing a child, immediately siding with the minor. What many don’t realize, though, is that child sexual abuse allegations have been used as leverage for years by individuals looking for a quick way to obtain the upper-hand in a divorce or child custody battle. In such cases, the accused could then become the silent victim. Unless an accused hires a reliable Houston sex crimes attorney and proves the accuser wrong, the world might end up turning its back on the person accused. 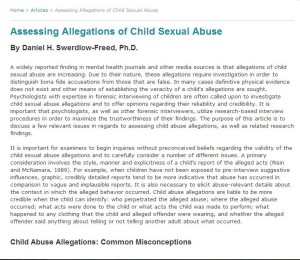 Unfortunately, when an alleged child sex abuse victim shows an advanced knowledge of sex or sexuality, many police and prosecutors consider this sufficient proof that sexual abuse did occur. That is often an incorrect conclusion. Nowadays, children can learn about sex and sexuality through many sources, including the media, the internet, older siblings, and friends.

A common misconception (among police, prosecutors and even jurors – unless they are properly educated during the trial) is that children do not lie about sexual abuse. As with adults, children can tell falsehoods for any number of reasons. However, unlike adults or even most pre-teen adolescents, young children may have difficulty distinguishing between fiction and reality. A young child can easily misinterpret a situation and, when reporting an alleged incident to an adult (who may be alarmed and force the child to repeat an allegation over and over until a false memory is “cemented” into a child’s mind), it could become nearly impossible to convince a child that he or she is mistaken. Once a false accusation is accepted into the criminal justice system, it is often impossible to clear an innocent person’s name, without the help of a skilled sexual abuse defense attorney. In a very real sense, a child may be “truthfully” reporting an incident of sexual abuse, because the child incorrectly believes the incident took place when it did not.

Importantly, there is a wide margin of error that could lead to a child’s report being different from what actually occurred. For instance, if a psychologist examining a child uses anatomical dolls but fails to properly educate the child about the purpose of the test, and what each doll represents, the psychologist could easily reach an erroneous conclusion about whether the child was sexually abused.

According to an article by Daniel H. Swerdlow-Freed, Ph.D., a child might also take back his or her allegations for reasons that are not always what you would expect:

Other children may encounter a withdrawal of emotional support from the non-accused parent and may recant an allegation as a means of getting back into that parent’s good grace or as a means of restoring the family to its pre-accusation state. Recantations can be motivated by different factors and must be carefully assessed prior to determining their veracity and relevance to the allegation itself.

With all these complications that can just as easily acquit or put an adult in jeopardy, it is really best for all facing allegations of child abuse to tread lightly. An accused should immediately consult a dependable Houston sexual assault lawyer for help. Firms like Scheiner Law Group, P.C., which offers free consultations in most cases for people facing sexual assault allegations in Greater Houston, should be able to advise the person about which steps to take and how to protect one’s rights.