Sex crimes are serious matters which the Lone Star State does not tolerate nor belittle, which is why the Penal Code provides strict punishment for offenders. Possession of child pornography materials, for instance, could have the court adding weight to your penalty due to aggravating factors, such as the number and type of photos and the medium or technology that you’re using. Thankfully, with a reliable Houston sex crimes lawyer on your side, you can fight the charges. 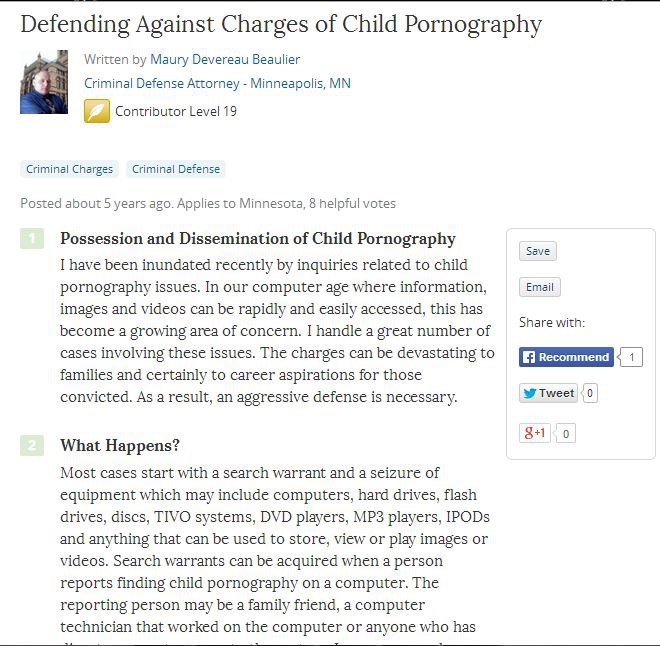 Federal law lists a few elements for the courts to prove when you are indeed guilty of possession. Essentially, a (1) person has to knowingly possess (2) any image (3) containing child pornography (4) and that the image moved interstate commerce or was made by items that moved in interstate commerce. Your defense will have to hinge on maintaining your innocence against any one of these elements to avoid conviction.

One of the more common defense cases involves defendants with materials in question found via a computer hard drive. It might have been downloaded by someone else, or it might have been planted by an angry spouse, or maybe the computer used to belong to someone else before it came into your possession. Whatever may be the case, if you successfully defend yourself against such accusations, you would have disproved the first element.

If there were no warrant presented before the search, the confiscation of your hard drive is already illegal. Even with a warrant, the arresting officer will still have to establish probable cause for the search and confiscation, as attorney Maury Devereau Beaulieu writes in Avvo.com:

“Finally, search warrants that are used to seize computers and other equipment with electronic storage capacity may be flawed and unsupported by requisite probable cause. When probable cause is lacking for a warrant, any evidence taken as a result of that unconstitutional seizure may be suppressed and cannot be used at trial.”

According to federal and Texas state law, any use, promotion or exploitation of children under 18 years of age for any sort of depiction of acts of a sexual nature is prohibited. With this, a defendant can claim that he had no knowledge that the pictures were of players or characters who haven’t yet attained the age of consent in Texas.

Defending against a case for possession of child pornography is serious business. Thankfully there are many lawyers, such as the experienced sex crimes attorneys at Scheiner Law Group P.C., whom you can count on to help you set the record straight.