Some defendants who seek to reduce their sentences choose to plead guilty or “no contest” and ask for a plea agreement. In most cases involving second-degree felonies, such as an improper teacher-student relationship, probation and fines may be meted out as punishment instead of imprisonment. Web reporter Carol Kuruvilla’s article for NY Daily News tackles one such case in Houston: 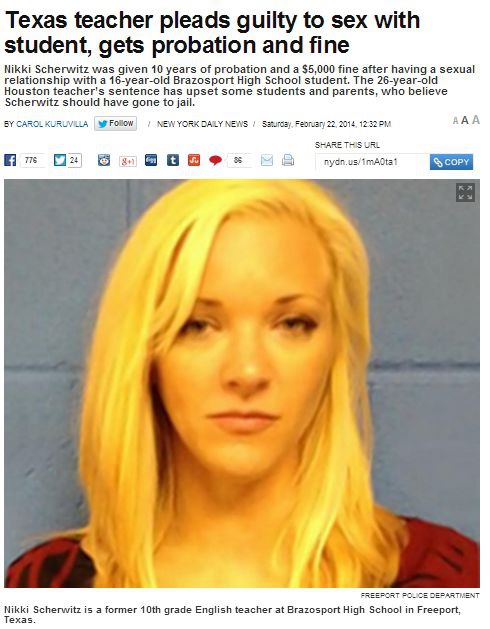 “Nikki Scherwitz, who pleaded guilty to having a sexual relationship with a 16-year-old Brazosport High School student, was sentenced to 10 years of probation and a $5,000 fine.

Prosecutors reportedly agreed to the plea deal because the student was nearly 17, the age of consent in Texas. Scherwitz, 26, also agreed to send written apologies to the victim’s mom and to the Brazosport Independent School District in Houston.

With the police hot on her trail, the woman resigned from her job as a 10th grade English teacher last year.

Scherwitz is now considered a convicted felon. She has to abide by a curfew and has been ordered to stay far away from minors.”

The Texas Penal Code states that certain sex crime offenses may warrant a punishment of imprisonment of 2 years up to 20 years, plus a fine of up to $10,000. In Scherwitz’ case, a plea negotiation took place for her prison sentence to be suspended.

Any criminal defense lawyer assigned to such a case must be well-versed in the laws regarding the sexual assault of a minor, in order to competently handle the plea negotiation process. Among other things, the defendant’s lawyer will seek to point out the benefits of a plea agreement for both sides, given that an expedited case resolution is what many complainants and their families desire. In any case, defendants charged with such an offense should consult a reputable Houston sex crimes lawyer from a reputable firm like Scheiner Law Group, P.C. to determine whether plea negotiation is indeed an option.

An experienced lawyer who is Board Certified in Criminal Law can determine which aspects of the case can be used to come up with the terms of the plea agreement prosecutors are likely to find acceptable. For instance, in the case of Scherwitz, the defense lawyer pointed out that the child was close to the age of consent in Texas, which is 17 years old. The presence of consent during the improper relationship can lessen the apparent seriousness of the accused’s sexual offense.