In Texas, cases of sex crimes, involving both male and female victims, continue to grow—a similar pattern shows in the rest of the US, as well. National statistics for sex offender crimes also show that there are more than 700,000 registered sex offenders in the US as of April 2013. 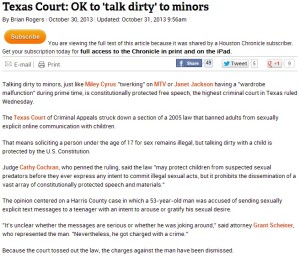 The cases of sex crimes—rape and sexual assault, online solicitation, statutory rape, child pornography and molestation, and internet sex crimes—are already alarming enough by themselves, especially if the victims are minors. It is admirable that schools, universities, and other institutions are taking steps to raise awareness about state laws regarding rape and sexual assault, and are encouraging survivors to step up and report the crimes. However, authorities take caution and protect individuals who are or have also been falsely accused of committing sex crimes.

Rape and sexual assault are serious offenses; it is life-changing, and thus, cannot be compromised by lies and innuendos. Survivors are protected and, to the full extent of the law, the culprits get to meet their punishment. But the law also looks around the other side of the spectrum: the accused who are entitled to protection and representation by a conscientious Houston sexual assault lawyer because of certain statutes that give them certain rights.

For instance, courts have taken into consideration the recent amendments made to Texas state laws regarding online solicitation of minors. The Texas Court of Criminal Appeals has rendered invalid the statute of engaging a minor in conversations of an explicitly sexual nature, as they believed that the tenets of the law were too broad. For instance, if it had been illegal to share links, photos, and videos from the media containing sexual content, that would then violate people’s rights to constitutionally protected free speech.

Thus, individuals who have been accused of crimes of such nature are entitled to have their day in court again. This highlights the Harris County case “in which a 53-year-old man was accused of sending sexually explicit text messages to a teenager with an intent to arouse or gratify his sexual desire,” as reported by an article on Chron.com.

In a just and civilized society, equal treatment under the law is a given right. Victims of sex crimes, including the falsely accused, should be defended by a trusted Houston sex crimes attorney, such as those from the Scheiner Law Group, to help restore dignity to those who must face the process and move on.

(Article Excerpt and Image from From Texas court: ok to ‘talk dirty’ to minors, Chron.com, 30 October 2013)