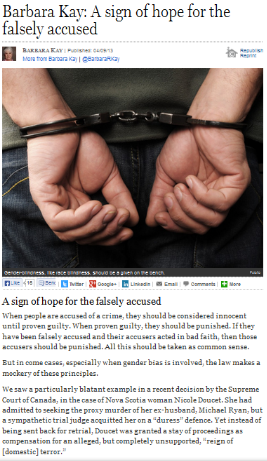 Barbara Kay’s article for the National Post is about how the judgment over a sexual offense can be influenced by gender bias that usually favors women, considering existing laws centered on the protection of women’s rights. The author points out the flaws of such a system:

Sex crime sentences can last for up to a person’s lifetime and this can definitely ruin one’s standing in society. While there are indeed thousands of these crimes that are reported each year, a significant chunk of them is false reports. Through the legal process, the accused, even if acquitted, will still suffer the consequences of the incident.

The myth that women never lie about sexual or domestic abuse has become the received wisdom among too many judges. The result is that innocent men often are charged or imprisoned for violence — or lose access to their children, or lose jobs and reputations, or accept the indignity of the inscription on a sex offender registry (not to mention being bankrupted by legal costs).

Women are very vulnerable to sexual assault but there are some who take advantage of this idea to press false charges against men they simply don’t like. Fortunately, for cases like these, there are advocates who can represent defendants and uphold the facts of each case. A reliable Houston sex crimes attorney can sift through the haze of emotional pleas from plaintiffs and uncover the misinformation that may be lying within.

For the system to become fair for all, many changes need to be made in the way that these kinds of cases are handled; until now, for too many times, those who haven’t done anything wrong are sent to jail while those who are guilty of libel and defamation are given checks worth thousands or even millions of dollars. Thus, hiring a skilled Houston sexual assault lawyer from law firms like the Scheiner Law Group can bring justice to cases and restore the tarnished reputation of innocent defendants.